It takes guts to pursue your dreams, but having good role models and mentors can make a difference. These are things that have helped Leanne van Dam, a master’s student at TU Delft’s Faculty of Aerospace Engineering, on her journey to becoming a leader. As a recipient of the 2021 International Aviation Women’s Association (IAWA) scholarship, she hopes her example will inspire others to follow their dreams.

Growing up, Van Dam always enjoyed subjects like mathematics and physics, knowing that there is a finite answer to something. Her high school dream of becoming either a commercial airline pilot or flying for the Royal Dutch Air Force evolved after visiting TU Delft’s Faculty of Aerospace Engineering open day. She realised that building airplanes rather than flying them was a better fit for her.

As a bachelor’s student, Van Dam was inspired by two women she encountered at the Aerospace Women’s Day. One from the Royal Dutch Air Force and one from industry, she saw them as powerful examples of what she wanted to be in the future. One of them, she recalls, was a very reserved person. “I was that way as well, I wasn’t the one speaking up all the time,” said Van Dam. “I realised you can be like that and stand with power when you’re more on the introvert side. I hadn’t seen that and it inspired me.”

Those examples influenced Van Dam to take on new challenges. After two years of committee work with the VSV ‘Leonardo da Vinci’, the study association at the Faculty of Aerospace Engineering, she was asked to be the president of the board for 2019-2020. “I thought it was a big challenge at first, but then I saw it more as an opportunity,” she said. As the first female president of the VSV, Van Dam was certainly in the spotlight. “I learned throughout that year that in a field like aerospace as a female you’re going to be in the spotlight anyway,” she said. “You should probably just take advantage of that and show your best capabilities so that’s what I tried to do.”

Van Dam drew on those leadership lessons when she applied for the IAWA scholarship, which is awarded each year to a female student at the Faculty of Aerospace Engineering. In an essay about her personal experiences she described her vision about female leaders. On her role as VSV president, she wrote: “For the first time, I felt like I could have the opportunity to stand in the shoes of my role models. I could be the one to inspire others.”

The IAWA scholarship gave Van Dam the opportunity to connect with people from around the world, including the eleven other scholarship recipients. These interactions brought something to light for Van Dam. In the United States, she said, there is much more talk about empowering females, but you don’t hear those voices in the Netherlands as much. “I think we can help each other out more as women, even between students at the aerospace faculty,” said Van Dam. “Maybe something like a buddy system would help.”

“I have learned about my strengths and abilities and gained confidence in myself.” 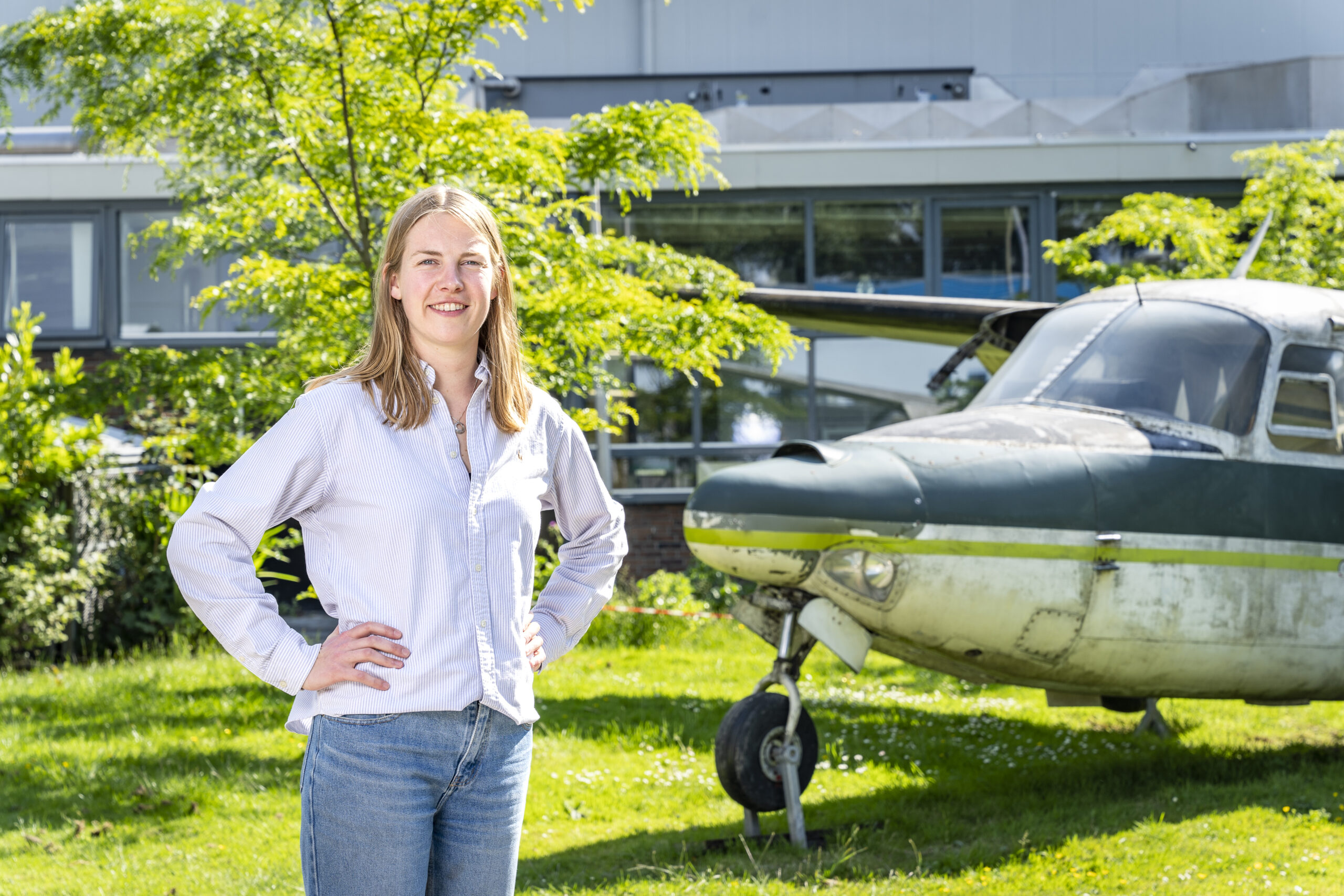 As part of the scholarship experience, Van Dam was also assigned a mentor, a former president of IAWA. “I think that it’s so immensely helpful to have a mentor, especially someone who is a bit older and already in their career,” she said. “It’s also good for making connections and networking.” For Van Dam that means participating on IAWA’s finance committee this year, where she will connect with and learn from experienced professionals like CFOs.

Prior to this, Van Dam already knew the value of having mentors. Through her board year at the VSV, she connected with a woman that advises the board who has since become a professional mentor. During a more difficult time in her life, Van Dam also reached out for a personal mentor. “I think it’s hard to ask for help. I saw it as a weakness, but I have learned in the past few years that it makes it a lot easier if you can, and maybe you can even be an example to others by doing so.”

Van Dam says both of these mentors helped her to grow tremendously. “I have learned about my strengths and abilities and gained confidence in myself,” she said. “I have come to realise that there were some things that I did because I subconsciously wanted to please others instead of myself. I have become more aware of that over the past year. And I have learned to choose to do things that I want to do instead of the things I think I am supposed to do, and to say no more often to things that I do not feel like doing; I choose for myself.”

Studying and other things

Now in the second year of a master’s in Control & Simulation, Van Dam is working on her thesis about sustainable aircraft trajectory optimisation. She’s investigating the possibilities of sending aircraft on a different flight path in order to minimise the environmental impact. For example, if the flight path goes into the wind, sometimes it’s smarter in terms of environmental impact to go around and fly a longer distance, but then have a lesser headwind.

In addition to her studies, Van Dam completed an internship with the Air Force where she designed the tactical control centre for a simulation involving six helicopters, each in different simulators. She also works as coordinator of the start-up voucher programme for the Aerospace Innovation Hub, which helps aerospace students launch their ideas through start-up funding and coaching.

As for advice for other students, she said it’s important not to forget things outside of academic life. “My time in Delft has been defined by everything I did besides my studies, like doing committees and being involved in associations,” said Van Dam. “Of course, I have learned a lot from my bachelor’s and master’s work, but from a personal side I have learned so much from working with people in other environments. I would encourage others to look beyond their studies and take part in extracurricular activities.”

This article was written by and for TU Delft Stories.